Others marking their calendar to remember YOU is extraordinary

Home Articles a Little Extra Others marking their calendar to remember YOU is extraordinary
Naveen Lakkur / a Little Extra, Quotes / 0 Comments 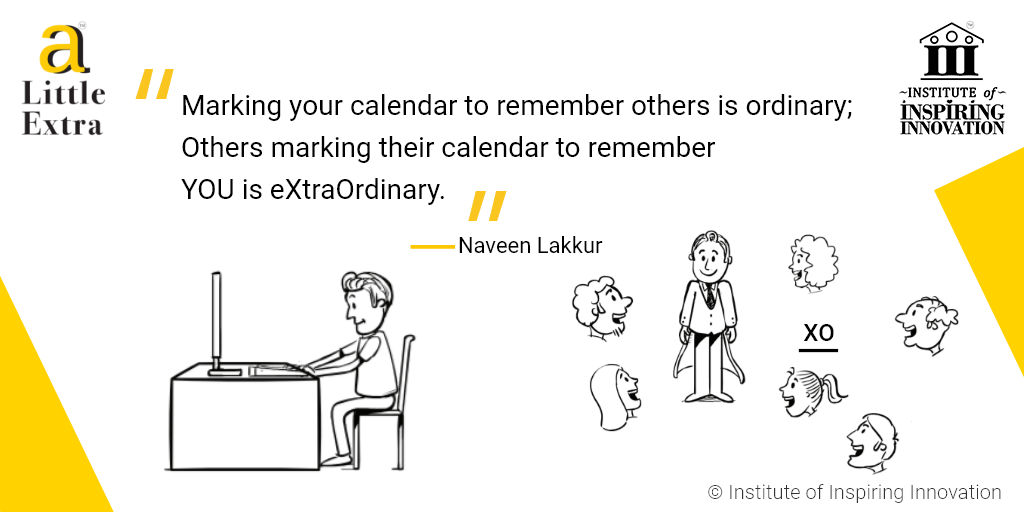 Think about it. You mark your calendar or write in your diary to make it a point to call other people or an acquaintance to take help or consult about a project. On the other hand, when you work a Little Extra hard (or smart), others mark their calendar to reach out to you for advice or consultation on projects. Let us read about achievers on other people’s calendars.

Story 1 – A Platform for Mentoring

Ravishankar Gundlapalli is the Founder and CEO of Menlo Park-based MentorCloud, a global social platform for mentoring. After finishing B.Tech in Naval Architecture at IIT, Madras, he completed M.S., Ocean Engineering at Florida Atlantic University, and Ph.D., Mechanical Engineering at the University of Michigan.

After his education, he began his career in the automotive and aerospace industries. He soon gained experience managing multi-million dollar projects for clients such as Boeing 787 Dreamliner, and high-tech companies like Raytheon, Hitachi Global Storage, and Cypress. He had engineering patents that he earned during his career in the supply chain.

According to him, humans thrive when they are connected and learn from each other. Even before technology, we asked for help by asking others. However, technology has connected everyone but still left everyone disconnected. Access to a particular piece of wisdom in a particular person was hard to find. Google helped find a coffee shop easier than a mentor. There had to be a mechanism for people to mark their calendar and their mentors to remember a meeting.

The defining moment came when he had a near-death experience, a near-fatal crash. The aircraft he was flying in almost collided with a helicopter flying the President of India. The news release talked about how the President was saved from a mid-air collision. However, there was no mention of him and other accomplished people on the flight.

The near-fatal crash made him think about creating impact. He made a pact that day to focus on creating an impact on many people. According to him, the best way to live is to live in the hearts of other people. His first mentoring engagements were when a visually impaired engineer marked his calendar to meet Ravi and ask him for help.

Ravi successfully mentored Srikanth Bolla and helped him get into MIT with full financial aid. After Srikanth graduated from Sloan school with an undergraduate degree, Srikanth Bolla started and is successfully running Bollant Industries. According to him, though serendipitous, magic happens when the right people come together.

With Mentorcloud, Ravi wanted to continue to create serendipity. Using his background in the supply chain, he innovatively created the supply chain of matching people’s wisdom with people in need. Realizing that there is a leakage in the supply chain, he started working to help people find experts, mark their calendar to show up to the meeting to ask for a piece of advice or wisdom that could change their situation.

In 2017, he published an interesting book called ‘The Art of Mentoring: Simple tools & techniques to achieve your full potential,’ a book for both mentors and mentees. It gives practical steps to establish and nurture a mutually beneficial mentoring relationship. For mentors, it advocates creating a personal board to cover important aspects of one’s life. It lays out a 4-step process for mentees to find and establish contact with the right mentor.

We all know that finding a mentor is essential to transform one’s life. Ravi wants to help 100 million people to achieve their full potential. We hope that he can keep helping mentors and mentees mark their calendars to meet and start meaningful conversations that could be mutually beneficial.

Hari Shetty is an engineer by training and a visionary by profession. After he got an engineering degree from the University of Mysore, he went to the University of Texas for his masters in Software Engineering. He started his career with Aspect Software. His work included pre-sales and technology architecture. With Aspect, he won many multi-million dollar deals with Fortune 1000 and government clients with Aspect Software.

During his career, he observed the way meetings are scheduled. While meetings are a fundamental part of business, he found there was difficulty in managing meetings. Using spreadsheets to handle strategic meetings was not feasible due to problems that would arise and for the meeting participants.

Spreadsheets are no longer accurate as they can be prone to errors. It is challenging to manage invitations, collaborate with multiple stakeholders to start and manage a meeting, and derive metrics and insights. These problems gave an idea to automate scheduling, management, and analysis of strategic meetings. Besides, people spent more time on scheduling than getting the actual sessions done.

The idea gave rise to Jifflenow, which takes care of all the three components of the strategic meetings workflow: pre-meeting, in-meeting, and post-meeting through its two platforms Jifflenow Event Meetings and Jifflenow Briefing Center, a product of Hari Shetty’s vision. The innovative approach to Hari’s product has made scheduling meetings meaningful.

With the tool, people can send out invitations for a meeting, book a room, and align calendars. After the meeting, the analysis will help you analyze metrics and estimate the revenue impact. All these are crucial to business outcomes. Jifflenow is assisting people in scheduling meetings involving multiple stakeholders and remembering meetings with important people.

Richard Saul Wurman started TED Talks to help people tell fascinating stories instead of presentations. In 2020, speaking on Ted Talks has become a must-do for thinkers and achievers. In the beginning, Wurman would be on stage with the speaker. If the talks were boring, Wurman would physically stop it.

It started on a low budget, in-person series of 18-minute talks. All around the world, TED produces talks, podcasts, and books, offers fellowships and grants, and gives little known speakers a chance to speak, for which they must sometime schedule and manage the event.

TED became a hit because fresh and innovative ideas took shape in the halls. Before the internet era, the content came in a compact disk. These days, their talks are streamed online. Ted.com currently has more than 3,500 talks.

In 2001, Sapling Foundation, a nonprofit run by Chris Anderson, bought TED Talks. Under his stewardship, TED grew worldwide. Their revenue increased due to ticket sales to their events and conferences. The success of TED gave rise to many spin-offs under the TEDx brand. While TED focuses on global problems, TEDx focuses on local community concentrating on local voices.

As most speakers start their talk with stories from their own life before hitting upon the ideas they want to share, TED stands by its philosophy of ‘simplified, authentic storytelling.’ TED and TEDx carefully curate their speakers, mark their calendar, invite them, and train them to speak if required. Most speakers have been able to change their lives with their talk. There is no alternative to TED, where people could spread ideas on a global scale.