If you can lead in the line that you started, that’s eXtraOrdinary 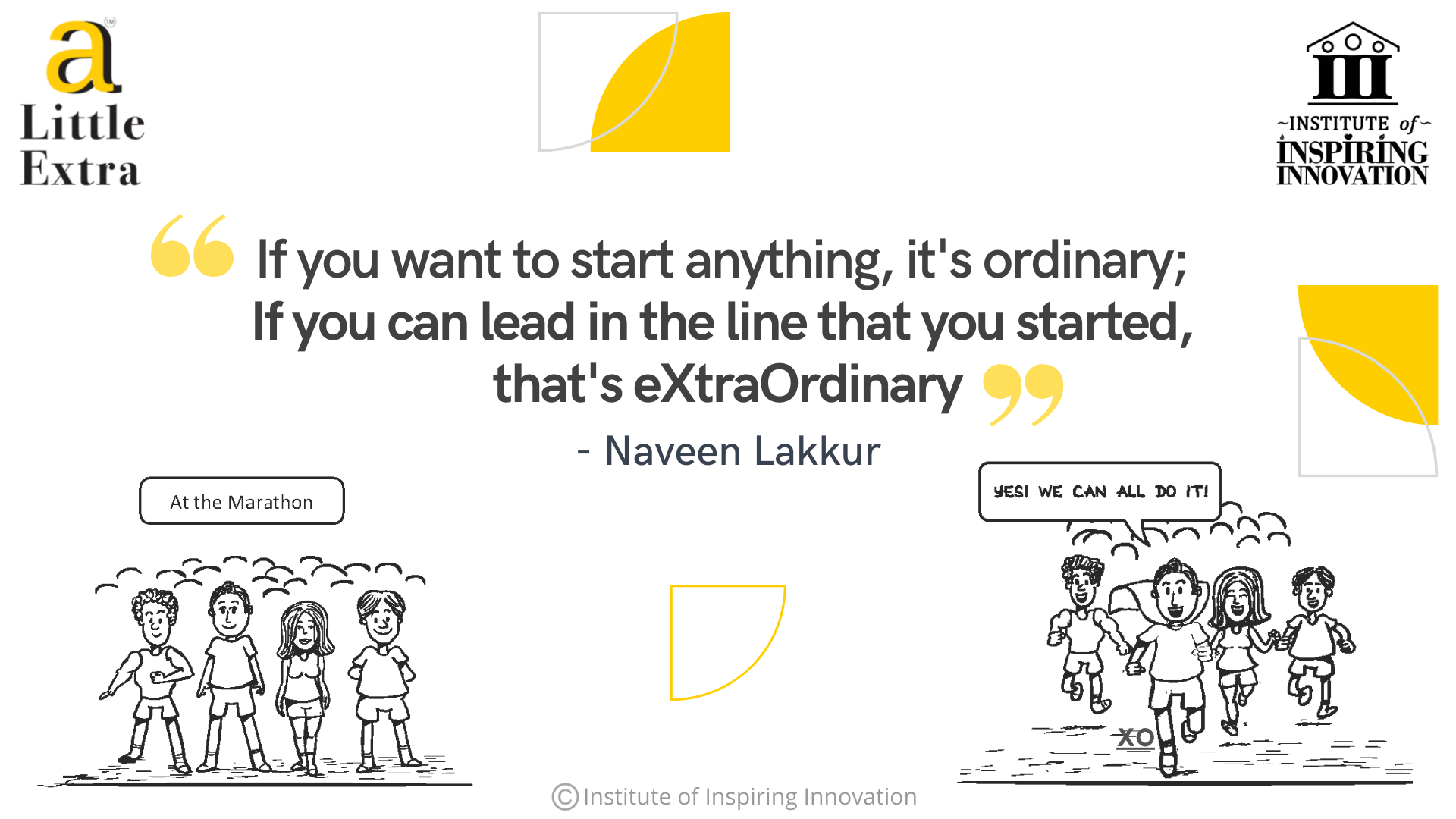 “If you want to start anything, it’s ordinary; If you can lead in the line that you started, that’s eXtraOrdinary.”- Naveen Lakkur

Jeffrey Preston Bezos (/ˈbeɪzoʊs/ BAY-zohss;[2]) was born on January 12, 1964 in Albuquerque and raised in Houston and later in Miami.

Bezos’s maternal grandfather was Lawrence Preston Gise, a regional director of the U.S. Atomic Energy Commission (AEC) in Albuquerque. Gise retired early to his family’s ranch near Cotulla, Texas, where Bezos would spend many summers in his youth.

Bezos displayed scientific interests and technological proficiency, and once rigged an electric alarm to keep his younger siblings out of his room. While Bezos was in high school, he worked at McDonald’s as a short-order line cook during the breakfast shift.

After Bezos graduated from college in 1986, he was offered jobs at Intel, Bell Labs, and Andersen Consulting, among others. He first worked at Fitel, a fintech telecommunications start-up, where he was tasked with building a network for international trade. Bezos was promoted to head of development and director of customer service thereafter. He transitioned into the banking industry when he became a product manager at Bankers Trust. He worked there from 1988 to 1990. He then joined D. E. Shaw & Co, a newly founded hedge fund with a strong emphasis on mathematical modelling in 1990 and worked there until 1994. With a Little Extra effort, Bezos became D. E. Shaw’s fourth senior vice-president at the age 30.

Bezos decided to establish an online bookstore. He left his job at D. E. Shaw and founded Amazon in his garage on July 5, 1994, after writing its business plan on a cross-country drive from New York City to Seattle. Bezos initially named his new company as ‘Cadabra’ but later changed the name to ‘Amazon’ after the Amazon River in South America, in part because the name begins with the letter A, which is at the beginning of the alphabet. At the time, website listings were alphabetized, so a name starting with “A” would appear sooner when customers conducted online searches. That was his little extra…In addition, he regarded “Amazon,” the name of the world’s largest river, as fitting for what he hoped would become the world’s largest online bookstore. He accepted an estimated $300,000 from his parents and invested in Amazon. He warned many early investors that there was a 70% chance that Amazon would fail or go bankrupt. Although Amazon was originally an online bookstore, Bezos had always planned to expand to other products.  Three years after Bezos founded Amazon, he took it public with an initial public offering. In response to critical reports from Fortune and Barron’s, Bezos maintained that the growth of the Internet would overtake competition from larger book retailers such as Borders and Barnes & Noble.

The company began as an online bookstore and has since expanded to a wide variety of other e-commerce products and services, including video and audio streaming, cloud computing, and artificial intelligence. It is currently the world’s largest online sales company, the largest Internet company by revenue, and the world’s largest provider of virtual assistant and cloud infrastructure services through its Amazon Web Services Branch.

Jeff Bezos is an American business magnate, media proprietor, and investor. Bezos is the founder and executive chairman of Amazon, having previously served as chairman, president and CEO of the company. With a net worth of about $200 billion as of August 2021, he is the richest person in the world according to both Forbes and Bloomberg‘s Billionaires Index.

Amazon was a humble beginning of an entrepreneurial journey with a clear vision to flow into every home in the world, bringing books or products or digital media…along with a Little Extra growing smile and a wonderful customer experience.

Jeff Bezos demonstrated the attitude of being a Little Extra by reconnecting to his roots, he later purchased his grandfather’s ranch in Texas and expanded it from 25,000 acres to 300,000 acres.

Jeff Bezos is now devoting his time to building multi-billion dollar rockets. ‘Blue Origin’, founded by Bezos in the year 2000, aims to transform space travel and colonize the solar system. The company’s first human mission flew Bezos and three crewmates to space on 20th July 2021. The spacecraft lifted off at 14:12 hours BST from a private launch site near Van Horn, Texas. At a post-launch news briefing, Jeff Bezos said: “My expectations were high and they were dramatically exceeded.”