How you see yourself is eXtraOrdinary 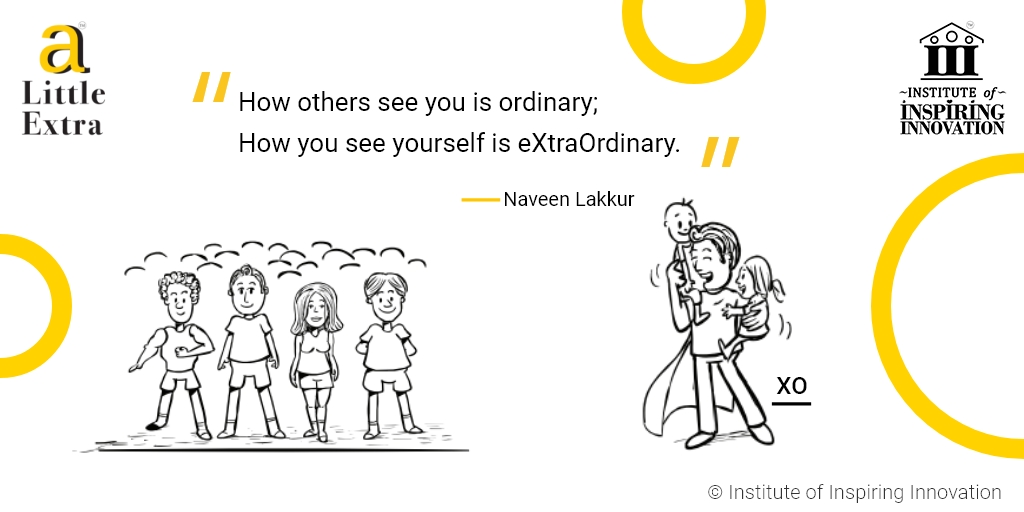 How others see you is ordinary; How you see yourself is eXtraOrdinary” – Naveen Lakkur

The world is run by people with the talent to create and manage. There are two kinds of talent. One born out of passion and the other born out of necessity. Talent is useless if it goes untapped or unrecognized. Millions of people’s talent go untapped due to lack of access, economic hardships, and mostly because they do not believe in themselves.

Believing in oneself is the first step towards making use of talent. Some go a Little Extra, build their self-esteem, and through determination, they invest in making themselves better. Here are a few examples of people who saw themselves as capable and achieved a lot.

There is no soul within the Indian subcontinent who does not know the name ‘Rajnikanth.’ Though he is a mild mannered man, his onscreen presence is anything but. Even at the prime age of 70, he is one of the most revered actors in the country with more than 130 movies in his name. There are families and individuals in many cities and towns across the country who vehemently worship Rajnikanth and look up to him as a literal god.

Before bringing the entire Tamil movie fraternity on their knees and building an empire, he had a day job working as a bus conductor with the erstwhile Bangalore Transport Service (BTS). Even though his adult life is filled with luxuries and adoration, his early life was that of hardships and struggles trying to make ends meet.

The actor was born to a Marathi family in Bangalore. His brother enrolled him at Ramakrishna Math, where he did his schooling. His interest in the performing arts was ignited by one of his first appearances, as Ekalavya from the epic ‘Mahabharata.’ His performance was so resounding back then, he even received praise from the renowned Kannada poet, Da. Ra. Bendre. Rajnikanth went on to perform in school plays much frequently.

However, he could not take up acting professionally once he graduated out of high-school. Back in the days, acting was not a revered career option, and neither did it pay well for those who started. Rajnikanth had to fill in as a breadwinner in the family. He took up jobs as a carpenter, coolie, bus conductor at the Bangalore Transport Service, etc.

He would also be involved in theatre at times. He happened to come across the acting course at the Madras Film Institute. Despite a lack of support from his family, one of his friends had supported him financially to sign up for the course. A Little Extra dedication to learning the craft made him discovered by the Tamil director K. Balachander.

He innovated in each of his films, delivering famous lines that also holds true for entrepreneurs and innovators. Shivaji Rao Gaekwad, aka Rajnikanth, saw himself as a capable performer and showed tremendous passion in his craft, winning him fans worldwide and becoming a brand.

Story 2 – The Emperor of an App Empire

Chad Mureta graduated from Coastal Carolina University in 2003 with a Bachelors in business management. Shortly afterward, he started his own newspaper company and worked as a real estate investor on the sides. By 2006, he already had his real estate agency. With everything going his way, he seems to be riding high in life. In 2009, he was involved in a terrible accident. While returning from a basketball game, he hit a deer, and the car flipped over four times before it came to a still.

His arm was nearly severed and had to undergo two major surgeries. He spent around a year and a half in the hospital recovering. The ray of hope came in the form of his friend, who handed Mureta a newspaper article about app billionaires. Unwilling and unmotivated to go back to his real estate agency, he went a Little Extra and threw himself into the research into the world of apps.

As soon as he was released, he put himself back to work. He borrowed a sum of 1.8k dollars to kick start the app business. He created his first innovative app, “Fingerprint Security-Pro,” which mimics fingerprint-scanning technology. Fingerprint Security-Pro became a bestseller in the App Store, peaking at number 27 in the App Store in 2011, and netting more than $500,000 in revenue. Following this enormous success, he went on to create dozens of apps that peaked in digital stores.

If Chad Mureta had not changed how he saw himself and had not thrown himself and drowned himself in research at the hospital, we would never have witnessed an app empire quite like his. His dedication and passion towards app making ensured that the world saw an App Empire.

Story 3 – An Inspiring Business That Built a Family

With more than Rs. 2,000 crores in turnovers just in the past few months, the Kirloskar Industries is thriving. The story begins in the 1880s when Laxmanrao Kirloskar set up a small cycle repair shop at Belgaum. Although he started his career as a school teacher, his passion was elsewhere – creating an empire that would employ many people.

While employed at his bicycle repair shop, he had read about industrial townships in the States and Europe and hoped that he’d one day have his industrial township. This dream soon came to fruition when he and his brothers set up their first factory in 1910. In time, they built a township around the factory and called it Kirloskarwadi. He held on to his faith in humanity and initially employed 25 personnel and succeeded in transforming a barren expanse into his dream village.

The first product to come out of the factory was the iron plough. Even though Kirloskar Industries started producing it as a product, it soon became the face of a revolution. Kirloskar Industries innovated further and created canned motor pumps, solar pumps, magnetic drive pumps. Today, Kisloskar has managed to be India’s largest centrifugal pump manufacturer with manufacturing facilities in the Netherlands, South Africa, Thailand, the US, and the UK.

Laxmanrao was not only a businessman-industrialist, but he was also a social reformer. At the peak of blind orthodox behavior by residents of the rural areas, he advocated removing such vile practices. He abolished untouchability within his township. He believed in second chances and even employed ex-convicts as a night watchman.

One of the notable uses of Kirloskar pumps happened in 2018 when a cave in Thailand filled up with water with 12 members of a football team trapped inside. The dewatering pumps from the Kirloskarvadi campus and was used to dewater the cave and rescue the trapped team.

There is a saying. If you want to lose weight, think thin thoughts. Similarly, Laxmanrao Kirloskar saw himself as a world-renowned industrialist. If it had not been for Laxmanrao’s trust and belief in himself, Kirloskar Industries and Kirloskarvadi would have never been a reality, employing thousands and serving millions around the World.

As I site possessor I believe the content matter here is rattling fantastic , appreciate it for your hard work. Velvet Kelley Mahmud