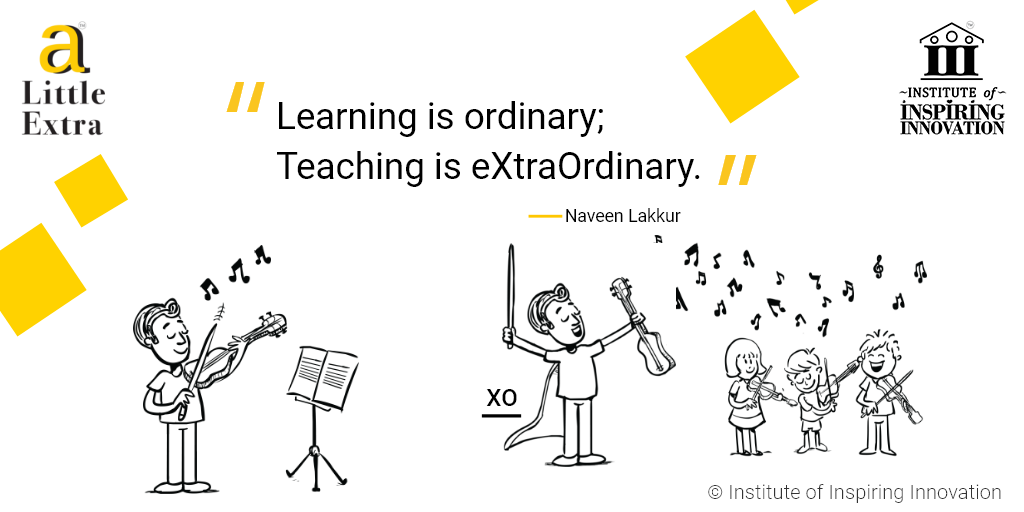 Acquiring understanding, gaining knowledge, and learning a new skill, behavior, and attitude is part of life. People learn through success and failure. Learning is part of everyday life, sort of a routine. Learning helps people apply them in their life to be better versions of themselves. On the other hand, we know that teaching is learning twice. Some go a Little Extra to teach others what they have learned. Let us look at examples.

The idea of tutoring students located on the other side of the world seemed far-fetched at first due to the opinion that one cannot offshore tutoring like the backend processes. However, Krishnan and Meena Ganesh changed that by starting TutorVista.

With the initial capital of Rs. 50 lakh and the backing of two venture capital firms convinced Americans of their reliability. Tutorvista went to market with the reliance on voice over internet protocol (VoIP) telephony, instant messaging, session recording, file sharing, and interactive whiteboard to market their offerings.

Personal tutoring is expensive in the US, with prices starting from $40 per hour. They soon onboarded students and shrunk the pricing to $100 per month that includes unlimited training in all subjects. They hired Indian teachers, living mostly in tier-2 and tier-3 cities, who took up the challenge of learning the technology provided, the American curriculum, and teaching at 2 AM to the American students.

In 2005, using the funds from its Series-B funding, the company acquired Bangalore-based Edurite Technologies in 2007 to serve the domestic market. The model for India was different due to the supposed non-availability of PCs at students’ homes. Edurite, which was renamed to Manipal K-12 Education, used Edurite’s base technology set up in its schools to develop solutions for Indian schools.

In 2008, TutorVista launched school management services where the company runs the school for the owners. They then entered the test preparation segment also. With Pearson picking up a stake in Tutorvista, the company got access to the captive base of US students to its roster.

Tutorvista invested in its curriculum, its teachers, and its innovative delivery system. To help teachers, it bundles digital content linked to the syllabus. It has an integrated infrastructure to support teachers and make teaching easy. While the teachers are receiving support to learn technology and deliver lectures, the founders are using their learnings to teach other entrepreneurs through their investments.

Did you know? In June 2017, Bengaluru-based Byju’s acquired Tutorvista from Pearson. Serial entrepreneurs Krishnan and Meena Ganesh went on to found many innovative companies.

Today, organizations have acquired a sea of knowledge. Some of the data is coming from IoT sensors, emails, call center interactions, and social media. On the other hand, organizations are building knowledge and creating business value by acquiring it through intellectual property, conferences, customer communications, business lessons from success, and failures.

While on the one hand, experts say that knowledge is best preserved and transmitted to people, it becomes a Human Resource challenge to not only protect some critical knowledge but also managing and sharing it. Knowledge sharing fosters innovation and productivity, makes employees open to collaboration, makes the workforce more involved, and creates expert individuals.

Infosys, one of India’s largest IT services companies, trains its employees who work in its offices around the country in a 350-acre campus in Mysore, also known as the Narayan Murthy Centre for Excellence.

Most of the knowledge sharing is based on its own processes and methods. Another way Infosys ensures employees keep themselves updated is through a knowledge-base that is filled with training and useful content.

General Electric, another player has implemented knowledge management practices through the Corporate Executive Council, which represents a compendium of management that meets for two days to share information and experience. There are many companies that we can quote as examples that have made their learnings available to employees and the public. Despite the challenges of protecting knowledge, learning new knowledge and teaching is detrimental to progress.

Byju Raveendran began his journey in coastal Kerala. Despite scoring 100% in the test himself, he did not join the IIM. He taught what he learned by helping a few friends crack the admission test to the Indian Institute of Management (IIMs).

He started teaching to a small group of students and soon graduated to teaching students from an auditorium. When that was not enough, he delivered his lectures through VSAT and record videos, which seems like foreshadowing.

Some of his former students who had gotten into various IIMs suggested that he take Byju’s classes to a new domain. He registered ‘Think and Learn Pvt Ltd. to create content for school students. In 2015, he launched Byju’s – the Learning App. The app was an instant hit when it was downloaded more than 5 million times in its first year.

The app operates on a freemium business model and offers its customers complimentary and premium services at a cost. They have innovated on their teaching methods. From offline videos, they switched to app-based delivery methods with interactive videos that make learning enjoyable. This has helped instructors overcome the pain point of personalization in offline or conventional methods, which is the lack of concept play and visualization.

With funding from a pool of venture capitalists that include The Chan Zuckerberg Initiative (CZI), Sequoia Capital, Sofina, Lightspeed Ventures, and Times Internet Ltd., they have increased their user base. They acquired WhiteHat Jr., a startup that offers online coding classes. Byju Raveendran’s love for learning and teaching has made Byju a preferred app for school students.