Energizing others is eXtraOrdinary 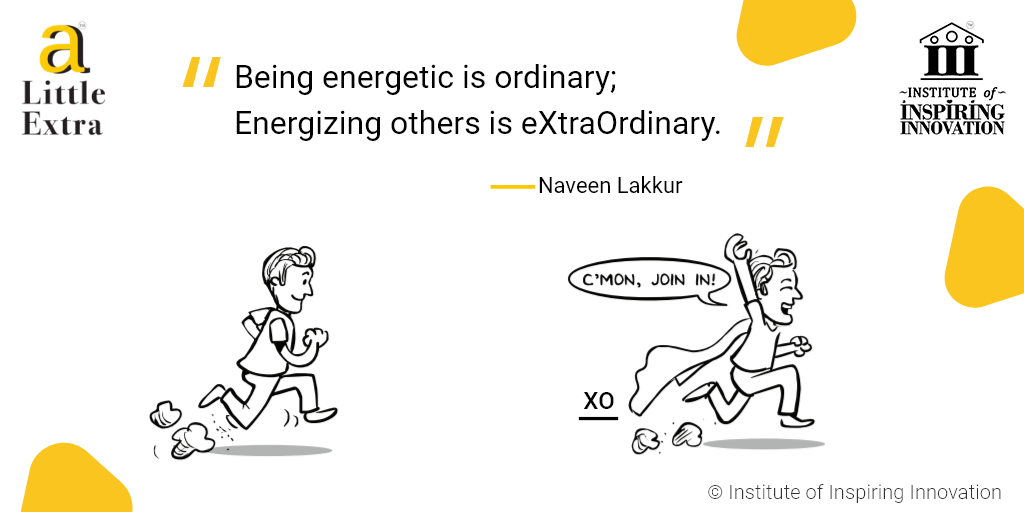 “Being energetic is ordinary. Energizing others is eXtraOrdinary.” – Naveen Lakkur

People who show energy in their tasks, projects, and businesses stand to gain big and grab the attention of people around them. Some people go a Little Extra, they motivate, inspire, and energize others around them or their teammates so that they achieve their goals together sometimes well below the estimated time. People who energize others grab the attention of a lot of people and inspire them. Let us look at a few examples of energizers.

NBA superstar Lebron James, football legend Christiano Ronaldo, and golf veteran Tiger Woods became successful in their sport. They have a common link. It is called Nike. They won championships in their sport wearing the brand. Not only them, but sports lovers, school children, and sneaker lovers also swear by the brand.

When Phil Knight was a track athlete in school, he observed his coach Bill Bowerman improving athletes’ performance by tinkering with their shoes. Growing up, he was interested in selling shoes, especially the Japanese brand, Onitsuka’s Tiger, in particular. With the same energy as a young athlete, Phil went to Hawaii and sold encyclopedias for some time. Then, he flew to Japan and stayed there for a while studying Buddhism and Shinto religions. He was enamored by the concept of kensho or satori – enlightenment that comes in a flash.

After Japan, he traveled to Hong Kong, the Philippines, Thailand, Vietnam, India, Egypt, Israel, Italy, France, and Greece. Traveling to these countries helped him think creatively. In Greece, he saw the Parthenon and Nike, the Goddess of Victory at the Temple of Athena, which later influenced his company. He had written a paper while at Stanford on why shoes must be manufactured out of Japan, where the labor was cheaper.

Back in the U.S., he started Blue Ribbon Sports to sell Tiger Shoes exclusively. He had ordered a consignment of Tiger shoes, which came a year later. Despite the demand, he had problems with Onitsuka, like them not honoring exclusivity and their shoes’ late arrival. With help from his childhood friend Jeff Johnson, he founded Nike. Bill Bowerman, Knight’s high school running coach, provided technical input.

Knight used his creativity to instruct the artist to represent athleticism or running as the logo. The energized designer came up with the iconic Nike swoosh. Over the years, Nike had to innovate a lot to overcome quality issues. In 1980, the company went public, helping it to pay off debts.

Phil Knight documented his stories and his learnings by writing his book ‘Shoe Dog,’ a book that Nike’s fans were waiting for. The memoir chronicles the operational, financial struggles, production troubles, overcoming legal troubles, and the competition with other brands like Adidas. The book has been energizing entrepreneurs and startup-enthusiasts to be pursuant in their endeavors.

Story 2 – An Energizing Entertainment Company to Marvel At

Pretty much, the plot of most of the Marvel movies is as follows: A city or the Earth with its inhabitants is going through its darkest hour, all the superheroes defending it are on their knees amidst smoldering ruins, and the villains are closing in to deal them the death blow. But then, somebody sees a silver lining. Energized, the superheroes rise up to the defense. You know what happens next.

Marvel Entertainment’s darkest hour came in 1996 due to selling off characters like Hulk, Black Widow, and Thor to other companies, and bad business deals due to which their stock value collapsed followed by the blame game between the company and the investors. Buoyed by the success of Spiderman and X-men, Marvel acquired ToyBiz and brought out cards and toys, costing the company $700 million putting the company in debt.

Marvel Entertainment is a product of 80 years of hard work from their energetic founders and employees. It involves failures too. The first edition of Marvel comics was published in 1939 and sold 80,000 copies. This success gave them the impetus to release edition number 2. Captain America was introduced in 1940 a year before the Pearl Harbor attack. He entered the hearts of the readers when he fought Hitler.

They followed a fundamental rule of storytelling, which is, ‘show, don’t tell.’ But after the war, as Europe and America were rebuilding its economy, people’s interest in enemy-beating superheroes began to fade forcing them to focus on different genres. Come 1996, the comic book and card business collapsed. Marvel had already dabbled in cinema since the 1980s.

In 2003, an energetic talent agent proposed producing movies under Marvel’s own banner. This way, Marvel could produce movies where stories crossover just like in the comics helping the company reap the profit. It was a gamble, but Merryl Lynch opened a credit line of $525 million to spend on ten movies. The collateral? The rights to Thor and Captain America, the jewels of Marvel Entertainment, among others.

With the money, they reacquired the rights to some of their characters. In 2008, Iron Man was released. It was the first of many standalone superhero movies. A plot must have a beginning, a middle, and an end. Little did viewers know that it was just the start of the titanic interconnected narrative with labyrinthine plots with a complex timeline. Pretty soon, the Marvel Cinematic Universe got a fanbase and fan theories.

In June of 2009, Marvel Entertainment was acquired by Disney and since then, it is only the start. There is no shortage of Marvel movies and TV series for people to binge on. Marvel’s recent Black Panther broke box office records to become the 12th highest-grossing movie of all time with little more than $1 billion. The whole Marvel franchise is estimated to be $30 billion.

A company that was in debt 20 years ago has seen a remarkable turnaround in its fortunes. From the jaws of defeat in 1996, the energetic people at Marvel and Disney have built a multi-billion-dollar victory with the Avengers series alone grossing a billion dollars, energizing their viewers with their magic.

Chamath Pataliya is not a household name except at Silicon Valley, but he is a sharp investor within high-tech. He is known as one of the critical members helping Facebook grow. His family left Sri Lanka for Canada when he was still young. After his engineering degree, he started working with AOL in 2001. He rose through its ranks and became the head of AIM in 2004.

He joined Facebook in 2007 and led the company’s mobile and international user growth initiatives, becoming Facebook’s longest-tenured senior executive. Between 2007 to 2011, Facebook grew by 14 times with a user base of 700 million, almost three times the USA’s population size. Since he was a child, he was obsessed with getting into the Forbes rich list, which gave him a purpose to grow his net worth.

With Facebook, he managed to enter the billionaire club but realized that he should use his wealth into meaningful, long-term goals and be grounded and helpful. While still at Facebook, he started to energize entrepreneurs by investing in their companies. Some of his early investments were in Palantir, Pure Storage (a public company now), Playdom (part of Walt Disney now), and Bumtop (acquired by Google).

In 2011, he left Facebook and started a venture capital firm called Social Capital from the profit he made from the acquisition of Playdom and Bumtop. During the same time, he also fulfilled his childhood dream of joining a basketball team. He did that in 2011 as a board member of the Golden State Warriors that went on to win the NBA championship twice in 2015 and 2017.

In his own words, he likes to see the joy in people’s faces when he is around. He is a known generous tipper, at times tipping 100% of the bill value. His tips for services provided to him have energized people. Social Capital made 207 investments in 131 companies thus far in consumer, education, financial, healthcare, and enterprise services.

Social Capital was one of the first investors in Yammer, an enterprise social network, bought by Microsoft a few years later. They also invested in Second Market, Red Robot Labs, Glooko, and others. His new strategy of energizing entrepreneurs is acquiring whole companies instead of making small investments, boosting its product development, marketing effort, and growth.

According to Chamath, money is a powerful tool; people must use it to positively impact, empower, and energize those who have their hearts and mind in the right place.