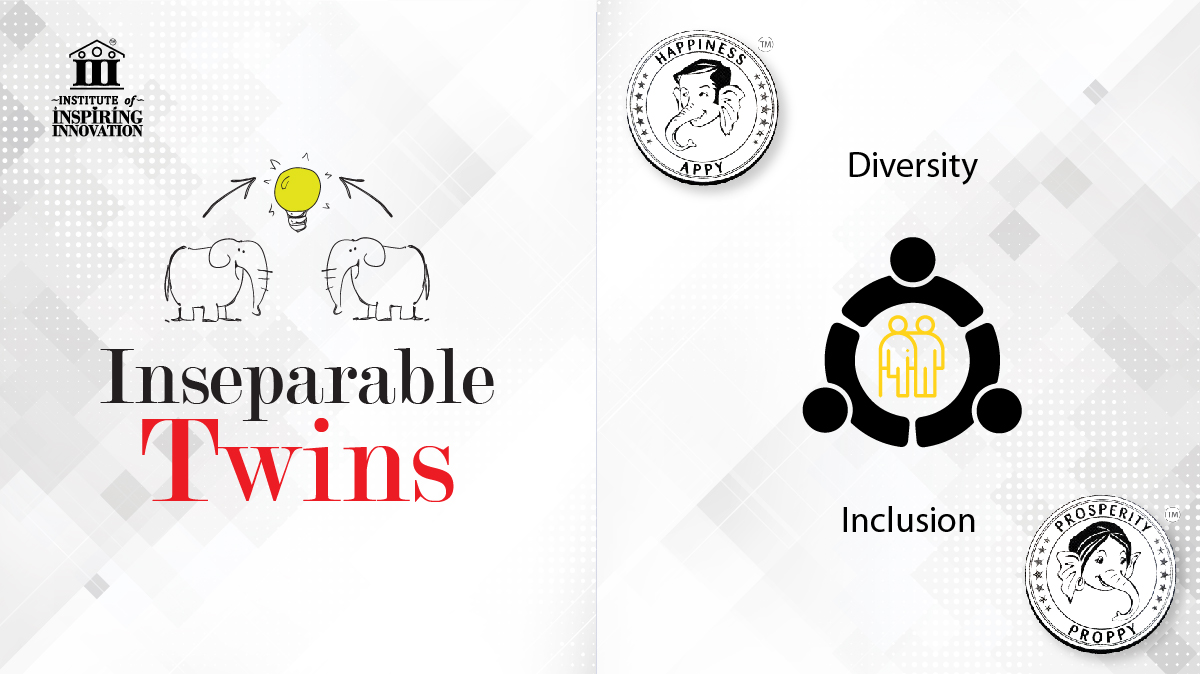 One evening, Appy and Proppy were playing with their friends at the nearby playground. They were playing Kabadi by splitting into two teams. After a long game, they took a break and sat under a huge tree for some rest. Suddenly a new kid came towards them and asked if he can join the team. He was a differently-abled kid. Twins Appy, Proppy and their friends were skeptical about adding him to the team as he looked different.

One of their friends said, ‘You look different from us; how can you be a part of the game we are playing?’

Kids silently looked at each other’s faces, so did Appy and Proppy. Appy’s gestures clearly say that he is confused.
Proppy called him and said,
Hey, do you think he can be a part of the game?
Appy shrugged and said, ‘I don’t know.’
Seeing this, Proppy smiled and said, I think he can be a part of our playgroup, and it is okay to be different from others. Everyone around us is different in one way or the other.

In fact, we both are different from the rest of our friends, aren’t we?

The new guy seems happy to hear Proppy’s words. He looked at Proppy and smiled at her.
Appy was still not sure about this, so Proppy continued, “Do you think a deaf person can sell something?
Appy said ‘No’ without a second thought.
Hearing this response from Appy, Proppy said, ‘I know you think like most people around us. But I have something to surprise you.

Have you heard of Nukkad Teafe?

Appy shook his head from side to side.

Appy was surprised to hear this and said I want to know more about the teafe.

The “Nukkad, The Teafe” is located at Raipur. The main intention behind this initiative is to ensure that society recognizes all kinds of people and paves the way for inclusion. This café, by Priyank Patel, employs only especially abled staff members for service and management roles. Currently, ten staff are working at this teafe. The café has become an indicator of social acceptance in the region, apart from serving tea, food, and satisfying conversations.

Appy was surprised to hear the story of the teafe and felt happy that his twin sister could open his eyes to inclusion.
Proppy continued, Priyank Patel was an engineer by profession; he used to work with various NGOs during his fellowship period. His experience working in villages and NGOs changed his perspective, and he later left his MNC job to start teafe in 2013.
Currently, he has two outlets in different cities, and now he employs people from transgender as well at the teafe. In a country like India, people hold strong preconceived notions about trans communities. He wanted to change this stigma attached to them and create a peaceful space for us to coexist.

He feels that social inclusion is the most needed change we should have as a society. But how do you think we will attain that change?
Unless each one of us does not change our mindset, nothing will change.
Such revolutionary attempts might remain ‘attempts’ all the time. We can do our part by changing our attitude towards such individuals. I hope someday we can inspire others too’, Said Proppy.
Appy was thinking of their conversation and suddenly said… ‘Yes! He can be a part of our team, and now I know it will not affect how we play. It is all about understanding them from a new perspective.
I am so happy that you understand the mere fact that people are different, and that is perfectly alright. By understanding each other, we all can happily coexist in a socially inclusive society for good.

Hearing this, Appy asked Proppy. Do you think more people will be doing such initiatives?

I mean, if we have more employers with similar thoughts, it can quickly open more jobs to thousands of differently-abled people.

Such a change can help society to smash the stigma around this, Right? For this, Proppy nodded yes! You are right, Appy.

What if we already have open for inclusive workplaces, but the right candidate does not know about these companies or their opportunities? Asked Proppy.

That would be great, said Appy!

In India, a range of inclusion trends has been widening for a couple of years. The companies are at different ends of the spectrum. Some organizations are doing great work in this space and have scaled up to become equal opportunity providers. Then, many organizations have yet to initiate any form of people practices encouraging talent from this segment.

That is where Equiv.in does a tremendous job. Equiv.in is India’s #1 career portal for underrepresented and diverse talent Women, Persons with disabilities, LGBTQAI+ & Veterans! Said Appy.

Proppy eyes widened, and she spoke. Really?
Now that is something, I did not know that existed earlier.

Appy said, ‘Now you know. Earlier I know about them, but I ignored their purpose and efforts because I have not thought about this from their point of view. Now I know it is a much-needed initiative for them and us.
You see everyone as equal and know it is not easy to crack the shell and bring about a change forever. They chose a different path to show their social responsibility.
Now I have a question popping up in my mind.
Do you think we need to address diversity even after inclusivity is attained properly?
What do you think?
Proppy asked Appy.

Uhm, I do not know. Let us ask our Mentor Lucky about this. He will know about this for sure.
Appy also agreed to Proppy’s suggestion and decided to call their Mentor at the earliest.
They walked towards the nearest internet browsing center.
They are not sure If Lucky will be available online to pick their call.
They could not connect him in their first attempt.
They were slightly disappointed about it for a while. By then, Appy and Proppy got an email saying that Lucky will give them a call in sometimes.

Since they have some time, they decided to browse Nukkad teafe and Equiv.in They read some interesting articles about these initiatives and the people behind them.
They continued reading for a while, and after a couple of minutes, Lucky came online and called his mentees to find what they must be having to share with him.
Appy and Proppy greeted him with Advance Christmas & New Year wish to him.

Lucky smiled back and wished them the same.

Lucky asked, “how are you guys doing? “
“We are doing great,” said Appy & Proppy Unanimously.
Oh, good to hear that, friends!
So why did you guys give me a call at this unusual time?
Asked Lucky.

For this, Appy answered, we met a new guy at our playground. He wanted to join us in our game and be friends with our playmates. He looked different, and hence we all thought that he could not be a part of our team.
Now Proppy interrupted and said, “Not ‘All’ of us but most of us were doubtful about it,” she smirked.

Later they both described their earlier conversation regarding Diversity & Inclusion, Nukkad Teafe and, Equiv.in, etc.,

After listening to them carefully, Lucky nodded with a smile on his face. He now almost knows what their confusion is all about.
Just to confirm that he asked them what is that they wanted to know?
For this, they repeated the question that they asked each other.
Do you think we need to address diversity even after inclusivity is attained properly?
Lucky was silent for a moment and then continued.
Dear Appy & Proppy, if diversity & Inclusion practicing in the workplace, it causes many positive impacts and accelerates its growth. Experts worldwide say that D&I elevates the team’s overall performance as it increases creativity, Increases profit, higher innovation, faster problem solving, and better decision-making.

We have just started our journey towards attaining D&I, which means not all the sectors are aware of it, and the ones who are aware of it are still processing the thought. Change in any existing structure is a gradual process, and it requires a lot of time.

And now I will come to your question; as we go further, we will see welcoming changes across sectors. It will ensure a better workplace and lifestyle for all despite their differences but what I feel is that it will be an ongoing process.

Diversity and Inclusion are Inseparable Twins; Inclusion will remain if diversity exists and vice-versa. Just like you two said Lucky with a smile in his face.

We might lose the balance if we ignore any one of them.

MNCs with great influence amongst millennials are taking great initiatives in workplace inclusivity. Ford motor company, Sodexo, L’Oréal, and Johnson & Johnson are some of the names for the list.

These companies can come up with more structured organizational reforms in terms of D&I, and one day we can dilute the barriers and include more and more talents into the mainstream workforce despite their differences.

Along with this huge initiative, it is inevitable to teach the younger generation about diversity and inclusion in the best way they can understand. In fact, teaching children and guiding them to become a good human being with a broad mind can change the whole scenario.

If our younger generation at workplaces becomes aware of the need and significance of Diversity and Inclusion, it will lead to a phenomenal change across verticals.