Discovering humility, service and character within, is eXtraOrdinary 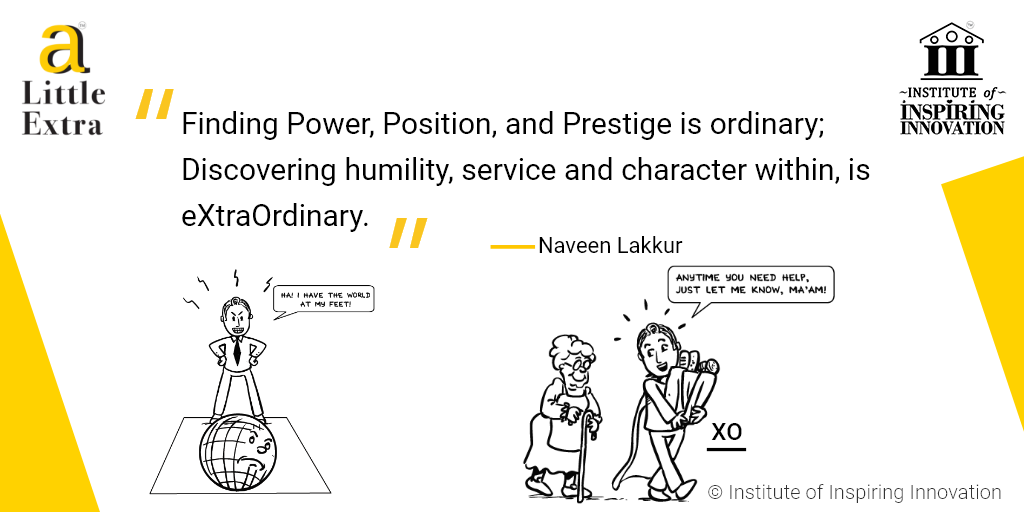 It is usual for people to pursue a higher position than they are in, which will give them power and prestige, putting them on a higher pedestal. Contrarily, some people go a Little Extra use of their position, power, and prestige to do good service. They look within to discover and display humility and character.

Let us look at a few people who are doing good service and finding prestige in what they are doing.

MadhuChandan Chikkadevaiah grew up in the 300-acre campus of the University of Agriculture at Bengaluru. Though he grew up in an agricultural family, he studied engineering. After working in various companies, he co-founded Verifaya Corporation that delivered automated software testing solutions. Living in California with a luxury filled lifestyle, he had power, prestige, and position.

While he and his wife were still in their 30s, they decided it was the right time to come back home to a new life and work to make a difference. He initially wanted to become a farmer, but he chose to work for farmers’ welfare after learning about their plight.

When he came back in 2014, he learned that farmers who took loans from banks could not pay it back. In July 2015, 20 sugarcane farmers committed suicide despite Mandya being well-irrigated year-round. Once upon a time, many farmers in Mandya used to be wealthy. But due to falling crop prices, lack of guidance on proper technique, government apathy, and other reasons drove farmers to fight for their existence.

Low soil quality is another culprit to blame, mostly due to excessive chemical fertilizers and pesticides. There were many organic farmers in Mandya, but low returns on their produce kept them discouraged. Madhu had to reintroduce the old wisdom of agriculture and promote the usage of scientific models. He knew Mandya’s farmers and consumers who were used to eating chemical-laden produce needed to change.

Madhu and four of his friends pooled in Rs. 1 crore to register the Mandya Organic Farmers Cooperative Society in 2015 to bring organic farmers to the forefront and help them get a fair price for their produce. To create a common platform for customers and farmers, they completed government formalities and established the Organic Mandya brand, and began to rope in organic farmers into their cooperative society for a nominal membership fee.

The next challenge for MadhuChandan was to convince customers to shell out more money on organic produce. Madhu went a Little Extra and created an organic zone on the Bengaluru-Mysuru highway as one of his strategies to bring people to visit his facility and subscribe to the cause. The zone has a supermarket, an organic restaurant, and an oil extraction mill.

Madhu started the concept of organic tourism with the ‘Donate Your Sweat’ campaign that allows anyone to work on Organic Mandya’s farms. Farmers who want help on their farms put a request on Facebook that will be answered by anyone.

The other two exciting initiatives with Organic Mandya are ‘Farm Share,’ where people can rent out farms to be cared for by the local farmers. The product can be used for personal consumption or sold to organic Mandya, and the other is ‘Team@Farm,’ where employees can come for a day-long farming activity at a nominal cost of Rs. 1,300 a day.

With 200 acres of cultivable land, 500 registered farmers, and over 70 varieties for sale across edible oils, dals and pulses, masalas, rice, dals, Mandya is seeing a reverse migration from farmers who had given up farming for a job in the big cities. Madhu gave a new beginning to an organic revolution by displaying humility, service, and character. We hope he inspires many, and this innovative model spreads throughout the country.

Mohandas Karamchand Gandhi was born to wealthy parents in Gujarat. Gandhi got a good education, including a law degree in England. After finishing law, he successfully practiced as a barrister in South Africa and saw first hand the inhumane treatment of the non-whites. He could have continued to practice as a barrister for a considerable future and make a name for himself but chose to fight for equal treatment of people in government services.

After succeeding with his cause, he decided to leave everything behind, move back to India, and give his life towards the Indian independence movement. His first decision was to shelve the decadent lifestyle that he was privy to since his childhood. If he had to reach the hearts of millions, he had to live like them. Because of this, he inspired people through a strong vision and led through example.

He went a Little Extra and empowered others through transformational leadership. He made other people feel powerful and confident. He knew that India’s independence could not come from only one person. Everyone had to dive into the cause. He innovated many times, listened to people’s ideas, opinions, and implemented some in his campaigns.

His leadership style garnered support from millions of Indians and won over the hearts of many Englishmen. Because of his transformation leadership, he left behind a legacy. Instead of drowning in prestige and power, Gandhi displayed humility, a sense of service, and character to empower people and fight for their rights.

An engineer by education, Girish Krishnamurthy finished his MBA and went to the USA and started his career with KPMG. Due to his interest in building large-scale solutions, he decided to come to India and play a larger role in technological development. After heading the India business of Kaseya, he joined TCS in July 2012 as the Vice President.

Among its offerings, TCS made software that transformed the Out Patient Department (OPD) process to help hospitals provide world-class service. Many hospitals are using decentralized web-based information systems and other hospital systems made by TCS.

While TCS wanted to ramp up the manufacture of medical appliances and instruments for measuring, checking, testing, and other purposes, they saw that it was best to create a separate entity. When the COVID-19 pandemic hit the country, Tata Group saw it as an opportunity to carve out an independent company and foray into the medical devices segment.

We hope that they continue to create cost-effective solutions and develop high-quality products that are accessible, safe, reliable, and affordable. Girish and his colleagues used their high position and power to commit to serving the masses by displaying humility, service, and character.

Amar Vivek Aggarwal is a practising Attorney and a Lawyer at High Courts and Supreme Court of India. He practices in the space where you find power, position and prestige are in abundance, sometimes converging or most times confronting.

He is recognised as a trusted Legal Partner and Advisor who is able to look into nagging legal issues and assist in finding solutions through Mediation, Settlement, Negotiations and if not through Court process and thereby helping the clients to achieve their legal goals with an eye on the end goal.

The 3 little extras that sets him apart:
1. There are no foes – he believes that in business, there are no permanent foes. An opponent today, could be your partner tomorrow.
2. Innovation & Thoroughness – he believes a legal solution is best achieved through thoroughness and by developing an in-depth and innovative model.
3. Values driven approach – he believes by shifting focus from animosity to harmony, we can achieve the business goals without legal hurdles.

He is a Founder Trustee of Sri Sathya Sai Gramin Jagrithi where they have provision for Free educational, healthcare and vocational training facilities to the underprivileged sections including orphans, widows and poor girls in a village near Yamuna Nagar, Haryana.

Check how he developed this character, he responds “Having been fortunate to complete MBA education from the 1st Batch at Sri Sathya Sai University. God has been kind to send me to Legal Profession, by giving a new meaning of the word ‘LL.B’ which is ‘Live and Love Bhagawan’, Which according to him can only be done if we live on His Ideals and practice them in day to day life”.

During the pandemic and challenging times, Shri. Amar Vivek Aggarwal has been a little extra to help the needy. He has established a 50 bed free Covid Treatment Hospital in Chandigarh.

It’s not a small game to establish and run a free hospital that is treating people from Covid-19. Indeed it’s a great service.