Being happy and making others happy is eXtraOrdinary 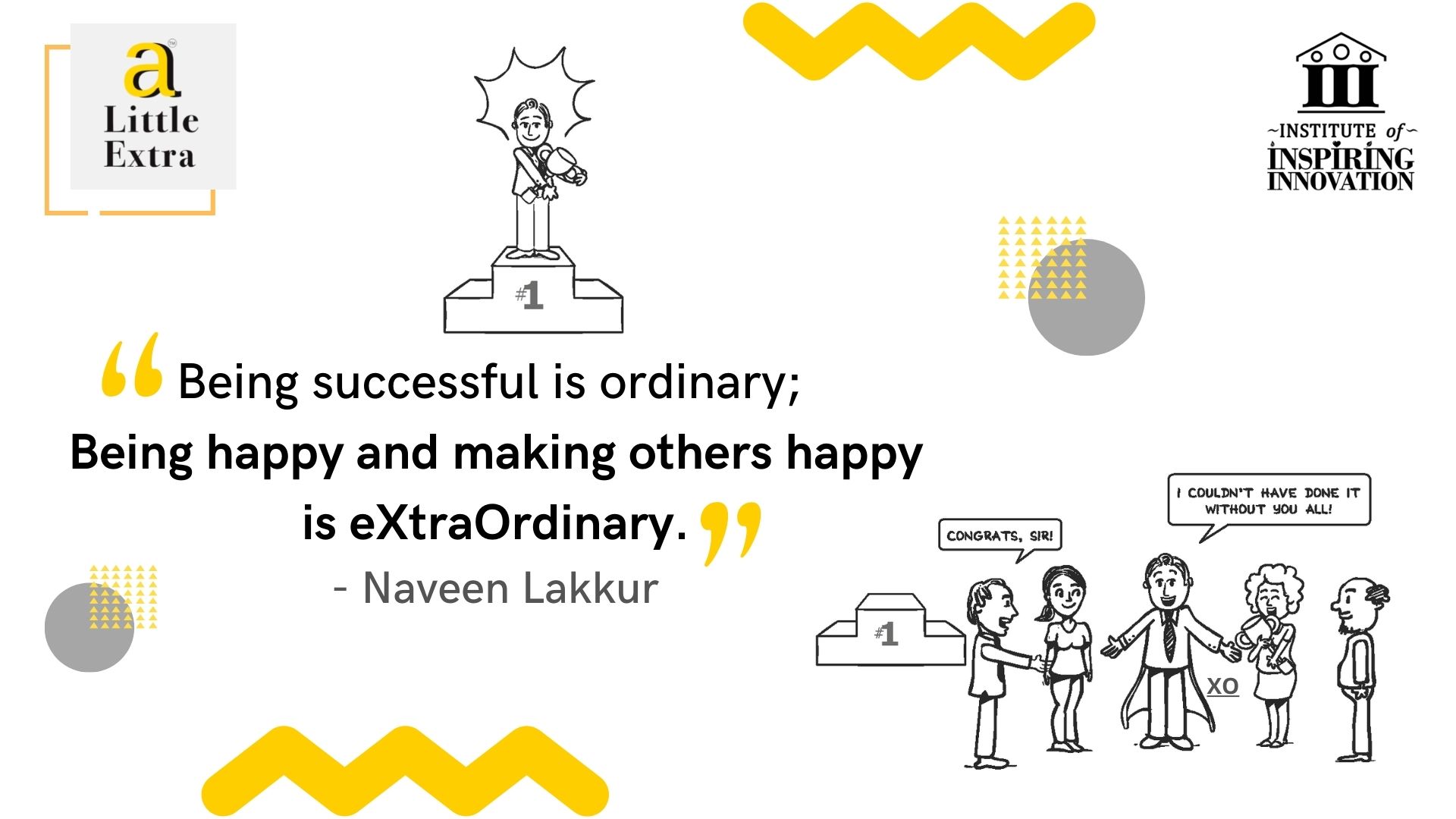 “Being successful is ordinary; Being happy and making others happy is eXtraOrdinary.”- Naveen Lakkur

IS PRASAD born in the year 1957, native of Denkanikota, studied in Government High School, started with a very humble background and also with financial constraints to pursue higher education. He expresses his gratitude towards Vasavi Trust for providing free hostel facilities and scholarship for his education. He put in a Little Extra effort and graduated as a Bachelor of Science in the year 1978 from Christ College Bangalore. His love for education continued, he had one foot in the legal field and the other foot in the finance field. He Graduated as Bachelor of Law in the year 1983 from Bangalore University and He qualified as Chartered Accountant in the year 1982. As a practicing Chartered Accountant in the name of IS PRASAD & CO., he touched new heights by acquiring marquee clients, he was smart in spotting new trends, and the advancement in the Information & Technology field. As a Post qualification, he did a Diploma in Information Systems Audit in the year 2003 from ICAI, New Delhi. He tasted success in his profession.

Very early in his profession while practicing as a Chartered Accountant he knew his determined effort will make him successful. He also remembered his humble beginning and started wondering ‘what would make me happy?’.

He started spending 3 hours every day for the last 3 decades to serve the Community in 3 areas, namely:

IS Prasad was willing to go an extra mile to make others happy. He realised an effective way to accomplish it is by being part of social organizations already doing it. It was his Systems Thinking approach that ignited him to be a Little Extra and make others happy on a larger scale.

As a President of Karnataka Arya Vysya Charitable Trust, one amongst various service activities, he wants to pioneer the cause of education by granting scholarships to the most deserving students for successfully pursuing higher education in the State of Karnataka, helping the youth in translating their dreams into reality.

Vasavi International club in the year 2015 recognized and honoured IS Prasad as ‘Vasavi Spoorthi Pradhatha’ for his contribution to educational activities.

IS Prasad served as Executive President of Kidwai Cancer Drug Foundation from 2014 to 2018. The Foundation was established in the year 1990 at Kidwai Institute of Oncology. The foundation procures drugs at discounted prices and offers to the patients at a substantially lower than the market price. During the last twenty years approximately Rs.250 crores have been saved by the cancer patients through the discounted pricing model.

As Hon’Secretary of Lions Club of Bangalore West Trust, where The Trust was established in the year 1984, later started Lions Eye Hospital & Cornea Grafting Centre at Bangalore. The Trust has organized 2835 eye camps in rural districts; more than 161,600 free eye surgeries were performed by the trust from its inception. The trust caters to the needs of the rural population by having satellite centers. Eye Screening has been conducted for more than 2.1 Million School children during the last 30 years. Through the International Eye Bank, collected more than 33,250 donor eyes and 11,290 corneal transplants done. The trust established Abhaya Oswal Institute of Ophthalmology. IS Prasad received ‘Distinguished Leadership Award’ from Lions International President and also the recipient of ‘Lions International President Award’.

As coordinator for organizing world’s largest blood donation at Kanteerava stadium along with several organizations, The camp mobilized 7000 bottles of blood in a single day. He received certification of appreciation from Lions International.

He has rendered several Professional Services to the Government institutions in the Health & Medical field.

IS Prasad is the President elect for the year 2021-22 of Federation of Karnataka Chambers of Commerce & Industry (FKCCI) which represents 30 district chambers of commerce and industry of Karnataka, 250 industry and trade associations apart from direct membership of 3500 making FKCCI which is very actively involved in suggesting policies to both the central government and the state government to promote Trade & Industry.

With a Little Extra attitude IS Prasad associated with several other organizations to serve senior citizens and actively engaged for Women Empowerment. He says, “he is more than happy to be a little extra to make others happy”.

He recieved ‘Karnataka Rajyotsava’ award from Newspaper Association of Karnataka in the year 2020 for the social services rendered.

Tumkuru University conferred Honorary Doctorate through the Chancellor Governor of Karnataka for distinguished social services to the society on 5th March 2021. He should be happy about that. CA IS Prasad became CA Dr. IS Prasad by making others happy.