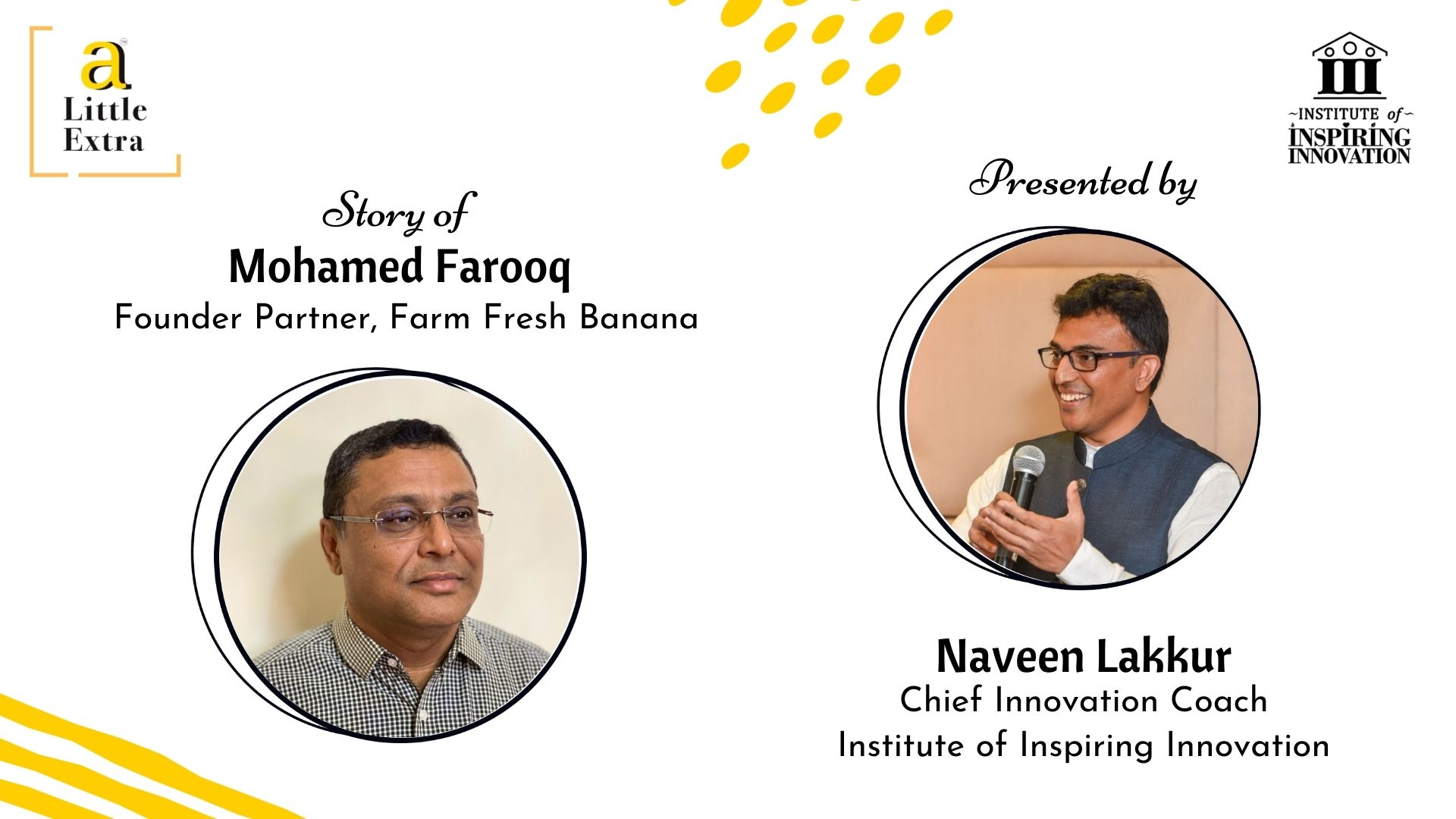 Mohamed Farooq came from a family which was deep rooted in farming and had a well established business of supplying bananas in the market. His elder brothers had joined the family business and helped it grow while Farooq was next in-line when he was studying engineering at Bangalore Institute of Technology. He was very inquisitive about technology. He wanted to be a Little Extra in acquiring new knowledge. He attended classes regularly, he spent more time with good natured people, he chose to study ‘Electronics & Communication’ which was then a hot and tough branch, it’s the same even today. Friends used to ask him “Why do you have to struggle so much studying when you already know that you will be part of the banana business? And how are these engineering subjects going to help you in your business? While some felt he was wasting time acquiring knowledge not relevant and some said “just chill, enjoy the college days. Anyway you don’t have to look for a job after studies”. He knew what he was doing. He was diligent in his efforts and the 4 years of engineering studies passed like a jiffy.

It was time for Mohamed Farooq to get into business and be with the bananas. Business was already well set. He was wondering in what ways he would be able to add value. His hunger to acquire knowledge continued but he realized that the fields were different now. He started to acquire knowledge about farming, about the weather, about the seasons, about the logistics, about the farmers, about the market, about the consumer. He learnt that bananas were the most friendly fruit, fitted to everyone’s budget, a sure item for every festival, healthy & staple food for millions, it cut across all religions and welcomed in all regions. He felt good that he was in the banana business.

Just then, the supermarket culture was being established in India. Banana being a staple food and with a high daily consumption, it was not an option for the supermarkets to offer bananas to their customers. But they had their challenges, the shelf-life was too short and the presentation mattered. Young engineering graduate Mohamed Farooq understood the problem, the need and took up this challenge to solve it. His logical approach was to study how the western world does it as the supermarket culture was well established there. He wanted to acquire that knowledge. He learnt that an European company manufactured ripening chambers which used cold air & gas to ripen the bananas which was exactly opposite to what was practiced locally which used the heating process to ripen the banana by removing the gases in the chamber. He explored the option of importing the ripening chambers, only to realize it’s economically not viable. He decided to be a Little Extra, started his innovation journey by acquiring new knowledge with an  understanding of the problem, researching on how it’s done in other fields, and the market needs.

He chose to build a banana ripening chamber locally, something suitable for the Indian market, for the Indian budget with a Little Extra objective that the price to customers should not increase. He collaborated with a cold chamber manufacturer and applied his engineering knowledge, farming experience and love for the bananas to create a banana ripening chamber. He infused right gases in the chamber and put it to test. The green bananas transformed into glittering gold. As much as he was filled with joy, it seemed like the bananas were smiling too with a golden yellow shine. The supermarkets liked it as the bananas were evenly coloured and their shelf life increased by 5 to 6 days and customers loved it as it was a treat to both their eyes and their mouth.

He realized that the ripening chambers needed to be closer to the markets and established several chambers and also helped other suppliers to establish the chambers in their own markets. Business grew multifold, supermarkets appreciated, farmers benefited and the Ministry of Horticulture in India recognized. Mohamed Farooq tasted the success of applying the knowledge for the first time.

He later witnessed that the process of logistics was inefficient as the damage of the bananas during transportation was high. The banana leaves used for packing and the stalks were leftover in the cities as garbage, adding to the landfills which are hazardous to the environment. It was time to be a little extra again and this time Mohamed Farooq explored process innovation. He introduced ‘Crates’ to transport bananas from the farms and the benefits were multifold, there was almost no damage to the bananas during transportation and almost zero waste created in the cities. It’s only the banana peel which remains in the cities. On the other hand the banana leaves and the stalks left behind in the farms acted as good manure to the fields. Again the merchants were happy as their customers were happy, the farmers were happy as they got better returns for their efforts due to reduced damage and much efficient logistics. Farooq experienced a Little Extra outcome through the application of knowledge, the combination of the ripening chambers and crates to carry the bananas helped the farmers to supply bananas across the nation and also beyond. It enabled the supply of bananas to neighbouring countries too, adding a Little Extra value for the nation’s development through increased exports.

Farooq’s urge to acquire new knowledge increased, the sensitivity towards sustainability also increased and the growing amount of plastic waste in the world worried him. He embarked on an innovation journey again. He built a plant to manufacture ‘Crates’. Instead of purchasing Crates made of virgin plastic to transport bananas, he chose to create Crates by recycling plastic. He sourced broken or disposed plastic chairs, broken vehicle bumpers, broken or worn-out virgin plastic crates, as raw material to manufacture crates to transport bananas. With a Little Extra additive he made the crates malleable, it increased its durability by losing the brittleness. He was able to produce these crates at 1/3rd the price as compared to the crates of virgin plastic. He made it affordable for the farmers to buy these crates to supply bananas. The farmers could get return on their investments in their first use itself with reduction or no damage caused to their fruits as against their earlier process of shifting in gunny bags or baskets. The farmers went on to be a Little Extra, they reused the crates multiple times. Farmers applied their knowledge to extend its usage to transport tomatoes, many other fruits and vegetables. Farooq created a new business line and increased the production capacity to 2000 crates per day. The farmers were happy and Farooq is happy because the application of knowledge is producing results and making a difference.